Odense Giants Softball Club was founded back in 1984 and is now a well-established club in Denmark. The members are a wide range of people ranging age-wise from 10 to 60, most being local residents but commonly also expats from different countries are or have been members.

The club prides itself on having motivated players, as well as maintaining a competitive and fun atmosphere. The club is well managed with many volunteers and great team spirit both amongst the players and parents on the sidelines.

The Softball community in Denmark is small and everybody knows everybody also across clubs. most clubs are situated in the Copenhagen area, but on Funen we have three clubs Odense Giants, Killer Bees Softball Club and  Østfyns Softball Club - Oysters. In Denmark Softball is played both by girls and boys with an approximately even distribution. The Danish Softball Association supports the clubs around the country, arranging many friendlies, common trainings, clinics, camps and trips abroad, beside arranging the regular tournament and generally encouraging the cooperation, relations and friendships across the clubs.

Odense Giants has over the years developed several national team players who have represented the Danish colors around the world e.g. at the World Championships, European Championships and other international events. The club has also won several Danish Championships and had many runner-up placements. Here, in addition to developing their softball skills, the players have made lasting friendships and enjoyed great experiences. 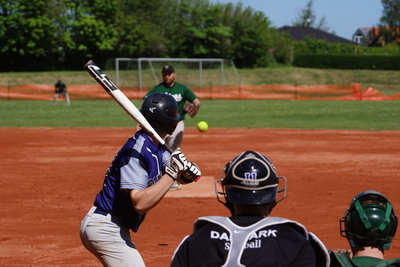 We have the following teams:

You and/or your child are welcome to participate in the training free of charge for a few weeks to see if playing softball in Odense is something for You.

During the summer season common club evenings are arranged regularly on the last or first Friday of each month at 6 o’clock pm. We take out the barbecue and make the famous “Giants burger”, drink the odd beer or soda and play matches with teams mixed for the occasion. Here we enjoy a few hours of softball fun and dinner is sorted as well.

The event is open for everyone, both members and non-members are welcome.